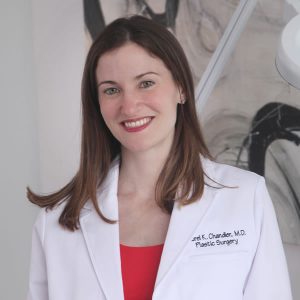 With Double Incision Top Surgery, there are a number of approaches that can be taken that result in different scar shapes: straight, curved, contoured, connected and more. Dr. Laurel Chandler has a special interest in this topic and has the skills to contour a chest and design a scar that matches the patient’s ideal chest wall as closely as possible.

For patients with excess skin and/or a large amount of breast tissue present, a double incision approach is extremely common because it is so effective at creating a flat and aesthetically appealing chest wall. What most patients don’t know is that there are often options when it comes to scar shape, which may impact the result in a meaningful way. While some patients are ambivalent when it comes to the scar shape, others feel it is important to achieve their desired result.

Scar shape is a discussion that I love to have with patients because it brings art and creativity into our discussion. Not all patients are good candidates for every type of scar shape. Anatomy may restrict the shape – for example if prior scars exist from a previous breast reduction, or if there is a skin fold in a certain location that steers the scar in the direction to allow for elimination of that skin fold. There are many factors that come into play when deciding on a certain scar shape. Anatomy is one of those factors. Another is patient preference and patient request based on their gender identity. It is my opinion that there are not specifically masculine scars, nor are there scars that are only “meant for” nonbinary patients. There are different types of scars that some patients may be more drawn to, which may or may not be related to gender identity. 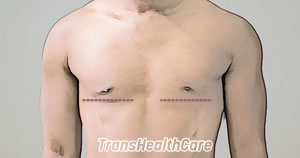 Straighter appearing scars are more easily achieved in a patient who does not have a significant amount of skin or fatty tissue excess around the chest (meaning on the lateral chest wall under the armpit or on the central chest wall). That’s because to achieve a straight scar, the incision needs to be placed slightly above the inframammary fold (the skin fold where the bottom of the breast meets the upper abdomen), but it also needs to start and end where the skin excess starts and ends at the central and lateral chest. If there is excess tissue outside the breast, the scars would be better placed within the folds to reduce or remove them. Patients with this type of anatomy who still desire straighter scars would be best with a straight-to-curved version of this scar, with the incisions placed within the creases as much as necessary but aiming high within the inframammary fold and tapering the scar so that it only raises slightly into the central and lateral chest regions, giving the scar more of a contoured appearance. 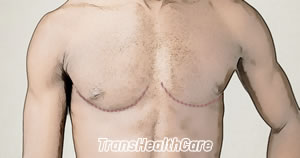 Curved scars can resemble a lower breast fold, sometimes requested for a more gender-fluid appearance. These scars would be placed as low as possible in the inframammary fold and would curve up as dramatically as possible, the reason being that the tension that results after top surgery has a flattening affect. In some sense, it is more challenging to create a curved scar than a straight one. The amount of curvature must be over-exaggerated in order to maintain a true curve to the scar. It is usually possible to create this type of scar regardless of anatomy, though the lateral upcurve would be more difficult to achieve in someone with a significant amount of skin excess laterally. This is because it may be more desirable to reduce or remove that skin excess, which requires that the scar travel more laterally along the skin fold, giving it a straighter appearance. 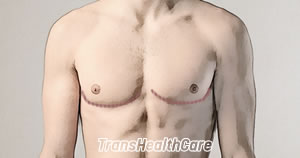 Contoured scars are requested by some patients who desire scars that follow the muscle border. These scars may look more natural by following the anatomic boundary of the pectoralis muscle. Generally, this involves a scar that is straight in the middle, but curves up ever so slightly medially and curves up more dramatically laterally, with a lateral upcurve that starts lateral to the nipple location, close to where the natural muscle border begins. These scars are only possible in patients who have very little to no skin or tissue excess laterally (under the armpit). Because of the dramatic upcurve laterally, it is impossible to remove a significant amount of skin lateral to where the incision ends. Attempting this type of scar in a patient with a lot of skin excess laterally would result in a large “dog-ear” beyond the scar, or in other words, a likely undesirable contour with excess skin lateral to where the scar ends. 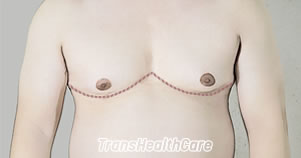 Connected scars in the midline are sometimes recommended for patients who have extra skin in the middle of their chest. I see this most commonly in patients with medial breast folds that are very close together. In some cases I highly recommend connecting the scars in order to avoid contour abnormalities in this location, such as a fold of extra skin or a divot. In patients with breast folds that start away from the center of the chest have more of a space between the two breasts that allows for scars to be separated by a skin bridge without requiring a connection in order to produce an aesthetically pleasing result.

Prior breast reduction scars can significantly limit the options available. The most common scar pattern from a breast reduction is called a “wise pattern” which looks like an anchor (around the nipple, vertically down and horizontally underneath the breast). I will usually try to place the lower incision just below the horizontal portion of the breast reduction scar to avoid having two horizontal scars at the inferior chest. The upper incision is then dictated by how much skin is needed to be removed, and so there is very little flexibility as to where the final scar will be placed. Sometimes, it is not possible to remove all the colored areola skin and some colored areola skin needs to be left behind, which would be located just above the central portion of the scar. If only an aesthetic concern, it can be tattooed for camouflage. If more of a sensitivity concern, it may require another procedure to revise and remove the colored areola.

Extended scars to remove excess tissue will sometimes be recommended to patients with a significant amount of laxity from weight loss that exist under the arm. In extreme cases these scars may be best extended up toward the axilla (armpit area) even to the point where the tip of the scar reaches the armpit. This can be called a “thoracoplasty” or “flankplasty” which helps to flatten the lateral chest. In more mild cases, the scar can simply be extended laterally toward the back in line with the double incision scar.

Preference and anatomy don’t always go hand in hand. Skin folds dictate a lot and steer me toward scars that will help eliminate them. Something else that guides my discussion is the amount of indentation and color to the lower breast fold. Patients with heavier breasts will often have a tighter, more adherent lower breast fold that may be permanently discolored from being underneath heavy tissue. Placing the scar within this crease can help us remove that adherence and color. Placing the scar above the crease may result in an undesirable “double scar” appearance or redness under the scar that does not go away after surgery.

Overall, the double incision approach is a reliable, effective way to achieve a flat chest wall, with multiple options regarding scar shape in addition to nipple size, shape and position. Regardless of scar shape, satisfaction rates are generally high after surgery and post-surgical scar care is so important in optimizing the appearance of the scar itself.

About Dr. Laurel Chandler
Dr. Laurel Chandler is a Harvard fellowship-trained and board-certified plastic surgeon who received specialty training in Top Surgery from some of the best experts in the field. Based in Fairfield County, Connecticut, Dr. Chandler provides personalized care for transmasculine, transfeminine and non-binary patients with a practice that is over 90% Top Surgery and Body Feminization/Masculinization. For more information, please visit laurelchandlermd.com or call 203-423-3132.

The Gender Confirmation Center is pleased to announce the addition of Dr. Daniel Jacobs to the practice. The expansion is the result of a thorough search for an exceptional plastic surgeon to join the practice and improve access to Top Surgery by decreasing wait times.

The Crane Center for Transgender Surgery has announced the launch of a gender-affirming hormone clinic at their transgender wellness center in Austin, Texas. The new clinic offers hormone replacement therapy for transgender and non-binary adults through an informed consent model. Both in-office and telemedicine appointments are available.

With last week’s announcement from the Government of Nunavut confirming that the territory will pay for mental health services and transition treatments for transgender and non-binary residents, Canada will now have nation-wide funding available for gender-affirming surgeries.